Scuba Diving in Cenotes is unlike anything you have done before…

The limestone platform of the Yucatan Peninsula filters the suspended particles from the water flowing under it, making it crystal clear.

Caverns are covered with ice age fossils and speleothems or dripstone formations. What you would see in a National Geographic or Discovery Channel documentary.

Some of the deeper caverns have a halocline at around 12 mts/45 feet of depth. This is where freshwater and saltwater meet, creating a change in density and an amazing underwater visual effect!

Most of the cavern dives in Cenotes are at a maximum depth of 15 mts/50 feet and there is virtually no current.

Oh, and let me tell you about the visual effects! As the sunlight hits the surface of the water, light bends in the denser medium and you get a spectacle of lights!

Afraid of the overhead? Worry not!

During cavern dives, you will always be able to see the natural sunlight at all times while following a guideline. The maximum distance you will ever be from the surface is 60 mts/200 feet. Now, in the unlikely event of an emergency, we can be out of the water much quicker than we would if we were diving in the ocean at 30mts depth. 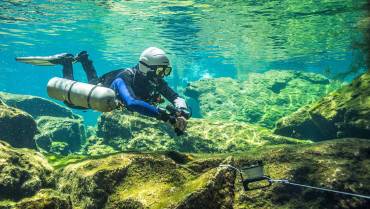 Take a Sidemount Diver Course in Mexican Cenotes with your preferred agency certification. TDI/SDI and PADI/PADI TecRec® recreational and... 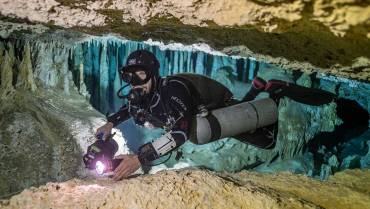 Dare to explore the UnderGround side of the planet under a safe set of rules! Learn Cave Diving in the best place in the world! 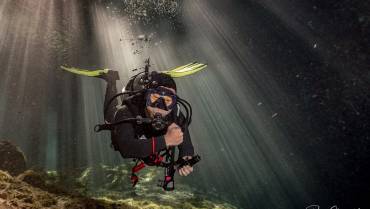 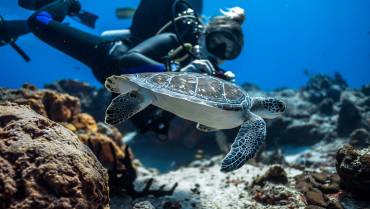 Diving in Cozumel from Playa